What infertility has been teaching me about God's grace


Last September was probably the most broken hearted period my husband and I truly had together. It was a tough month. I had just been offered a full time permanent job which you'd think I was supposed to be rejoicing over but instead I was struggling so much in my first week (transitioning from community to hospital context) on the job, I went home crying wondering if I had made some kind of terrible mistake. Secondly we were in the process of moving home late in the rental season here in Vancouver (which locals know even in the Summer its a tough market). But that was nothing in comparison to what came. My husband and I got the result of the test.

I won't go into detail, but it was bad. Really bad. For both of us it was devastating. What made it even hard (though it was no one's fault at all) was that other couples dear to us had announced their pregnancies that SAME week that we got our news. Not wanting to ruin their joy I literally suffocated while hiding my own grief. I put it in that box deep down and hid it away but in quiet moments in my day all the emotions I blocked up would come exploding out of me. I would be driving my car listening to something totally benign and normal or in Walmart comparing apple prices and out of nowhere it would puke out of me, this torrent of sorrow and before I could count to two I'd break down and be sobbing over apples or on  a Highway with blurred vision.

I didn't know I would be challenging my own beliefs about God and the bible that I had previously been (at least intellectually) rock solid with. Like:
- God is good.
- God knows best
- God is Almighty Creator
- God is perfect
- God is just

Thing is I believed those things in my head but I was not truly living it out in my heart. I was having irrepressible thoughts pop into my mind like:
- Im a GOOD person! I DESERVE children.
- Ive been planning and preparing for this, therefore, God you owe me
- If I am deserving, and I cannot have children then why do I see undeserving people conceiving and having (or throwing away) their children?

As a result I started battling the worst case of bitterness, envy and anger I had ever experienced in my life. In my personal life, because of my adhering to biblical beliefs that children are a "heritage from the Lord" it means that I am also vocally Pro Life. But in the last 5 months Ive felt I've needed to take a mental sabbatical from thinking about Planned Parenthood and abortions because it quite frankly makes me weep harder. At the same time Ive carried this huge terrifying fear of being THAT kind of crazy nasty woman. The kind that snubs her pregnant friends in order to make herself feel good or at least not have to face her own pain. 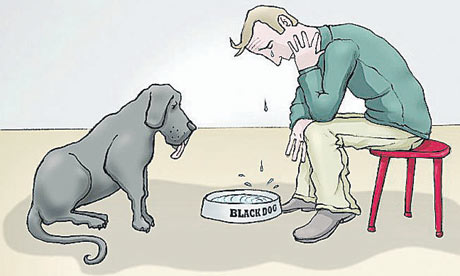 Winston Churchill famously labeled his depression as being like a big black dog that never left him alone. Someone much later on wrote a picture book for adults that I bought for work purposes (share it with client's who have mental illness). I never thought I'd be looking at that book for myself. It wasn't a clinical depression but it started as a constant  nagging fear during our 2+ years of not conceiving and then like a grief  losing a beloved family member when we found out the news.

Sometime in the weeks following I struggled with the above arguments I had with myself. I was having vicious theological debates with myself over the concept of goodness. My petty argument with myself was that I am good therefore I deserve to get pregnant naturally and have children.

In Mark 18:10 we find a guy calling out to Jesus saying "Hey Good teacher!" and Jesus responds.. "“Why do you call me good? No one is good—except God alone." Now Jesus IS good. Because he never sinned. By word, action or thought. But for Christian's he is our only standard of goodness. As Christian's we rate ourselves and everyone else as born inherently 'bad'. Our standard of good these days just looks like an imperfect person just trying to live life, pay their taxes and keeping their lawn appropriately cut. The guy calling Jesus good was putting the world's standard of "good" on Jesus and as such he was flat out refusing that title attached to that man's flawed worldly version of good. Now in other part's Jesus does use the title "good" eg "The Good Shepherd" etc elsewhere, but in doing so, he gives his own definition to what good is - perfection. Because he did that, the religious leaders of that time frequently picked up rocks and attempted to stone him multiple times because in saying what he was saying, Jesus was calling himself God. By calling out to God saying that I am a "good person" what am I really believing? Am I truly the pinnacle of goodness? Am I THE standard? The TRUTH? The WAY? My husband would tell you, no I am not. Im quite pathetic in trying to be good actually, I fail miserably every time.

Another argument against my terrible theology is my wanting my "good works" to procure God's blessing. God doesn't work that way. You can't 'buy' Gods favor with good behavior. God offers salvation through his son as a gift. I cannot earn it. I think God does bless obedience but it is based on his omnipotent power and knowledge and above all else, his mercy and grace. Sometimes obedience is painful and suffering may occur through doing right. In the bible there are stories where it says that God does deliberately stop conception of children. Sometimes its explained, sometimes it isn't. There are also examples in the bible where couples are devastatingly childless who also happened to be godly, obedient, humble people. Hannah and Elizabeth are two women I think of right now. Sometimes infertility occurs and there is no rhyme or reason for it. Sin is in this world which also means there is sickness. Some sickness comes as a direct result of ones sin in ones life - eg alcoholism often leads to liver disease. Other sicknesses just arrive because of a freak accident in chemistry in the body, its not our fault but its there.

Another argument is, my past, present and future anger in my head are just as equally culpable to God's law of sin = death as the person who physically commits murder. Jesus said, both are equally deserving of hell.

Thanks be to God that me with my angry thoughts as well as the man who commits murder while equally deserving of hell, are also both equally gifted salvation though undeserving we both are.

So, theres my sodden argument so far:

- I am a good person - WRONG. Only Jesus is good.
- God owes me - WRONG. He owes me nothing, yet he gives me something better (more priceless) than a child, he saved me from my sin yesterday, today and tomorrow.

My last argument was - why do some people get pregnant and some don't? Matthew 5:45 says that God gives sun and rain to both evil and good people. Thing is, I don't know others circumstances. Its really none of my business and I don't have the right to be mad from assumptions I make about people's lives when Im only seeing a minuscule view of their bigger picture.

Im young still. Only in my late twenties.  I am relieved that I started this process early. A friend who had also gone down this path counseled me to start digging around for answers after I shared with her my concerns about not conceiving in a 3-4 year period. I don't know how children will come our way, whether by medical intervention, some sheer miracle or by adoption. Im not sure. Im keeping my eyes and heart open to any direction. All I know is, I know Im going to be a Mom. But I have to be open to the idea that the process may not be the one I initially wanted.

This is very strongly teaching me that in planning my life, I need to hand God the pen and keep a pencil for myself. If its the other way round Im setting myself up for bitterness which Im now finding out the hard way. Corrie Ten Boom - a marvelous Christian woman who survived a Nazi concentration camp because she and her family hid Jews, once said -


“Hold everything in your hands lightly, otherwise it hurts when God pries your fingers open.”


The last thing I've learned is this - suffering doesn't have to mean Im alone. Jesus once said an odd thing - "Blessed are those who mourn, for they shall be comforted." When the hubby and I were told our news we had barely been mourning our loss for a week when I accidentally broke during a staff lunch when someone casually and innocently asked "Do you have children Melody?" With all my strength, I quietly answered back "We can't" Well thats one way to kill a conversation. Somehow by the end of the day, all my colleagues knew and were rather obviously avoiding my company or providing me with badly hidden looks of pity or stupid comments like "Have you tried raising your legs up?"

FYI, if you have children yourself, please don't offer "advice." No matter how well intentioned you are please SHUT UP. Your advice is very patronizing and borderline cruel. People in our situation only want advice from people who are going or have gone through this same thing. And I am so exceedingly grateful that I had more than one friend who I could unashamedly pour my grief out to because they had gone through it themselves. If you do want to comfort me, let it be just to comfort not to fix.  An interesting thing happened after that wee episode at work. I had FOUR colleagues privately seek me out at work and tell me they too were struggling with infertility. They were struggling with the shame, and the guilt  and the suffocating grief that I too knew so well and not having anyone to talk to about it. Within one and a half weeks of being a mourner myself, God drew me out to comfort others where they needed it and be that understanding person for them. Crying with someone else helped me too. Sometime later I saw the movie 'Inside Out' and there was a scene that explained it so well:


So there I have it. Thats about as far as I can explain it. Im still not happy that Im not a Mom, but I also understand its not my be all and end all. God put that desire in me and there it stays. And every now and then I pull it out and hand it up to God and say Hannah's prayer

Melody
Hi! Im Melody, a New Zealand expatriate living in Vancouver, Canada with my husband. During the day I work as a community Occupational Therapist. Im also a major bookworm and history & theology nut. I enjoy cross stitching, cooking, Star Wars, watching most sports, swimming and hiking and making 'to do' lists.